Unofficial Montreal CBC Report from Sector #1: Baby, it was cold outside!

Unofficial Montreal CBC Report from North Sector #1: Baby, it was cold outside!

It was certainly cold outside, but the birds had to be counted anyway! Never mind the biting northeast winds, temperatures of -15 C, ice pellets and snow hurling down, The 81st annual Montreal Christmas Bird Count took place on Saturday anyway. A number of groups covered the 24 KM count circle centered in Montreal West.

The group counting birds in the Point-Claire and Dorval Airport sector covered the area around the north and west sides of Dorval airport and part of the west-end of the island (Pointe-Claire) as well as the now infamous (among birders) TechnoPark. This is a mixed use urban area and 7 of us set out in three cars by 8:15 AM. Aside from one dead vehicle battery (that was quickly fixed thanks to a set of booster cables on hand in one of the other cars), the day went without mishap. Naturally, lunch at Lafleur’s was a welcome mid-day reprieve from the weather. There’s nothing quite like the Montreal version of greasy fries and toasted hotdogs to revive you! 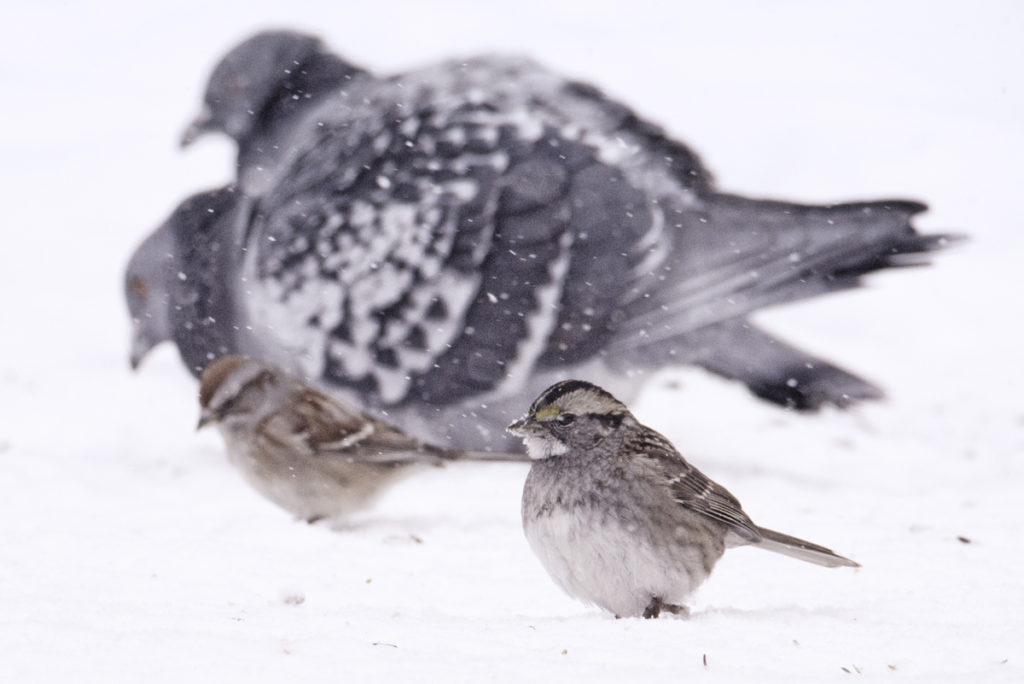 A White-throated Sparrow in the company of an American Tree Sparrow and Rock Pigeons. (Photo Connie Morgenstern)

As for the birds, feeders made a difference too! At a residential feeder near the TechnoPark area we found a few White-throated sparrows taking advantage of an easy meal, another was sighted in a wooded area for a total of 6. As noted in a previous blog post, small populations remain year-round on the southern edge of their breeding range, but most White-throated sparrows are migratory and move to the southeastern United States. A number of American Tree Sparrows, Dark-eyed Juncos, Northern Cardinals, Rock Pigeons and European Starlings were also found at the feeder along with the White-throated. Nearby we also saw a Brown Creeper doing what creepers do best of course – creep up a tree! Several other feeders on the route produced more Dark-eyed Juncos as well as House Sparrows, American Goldfinch and House Finches. 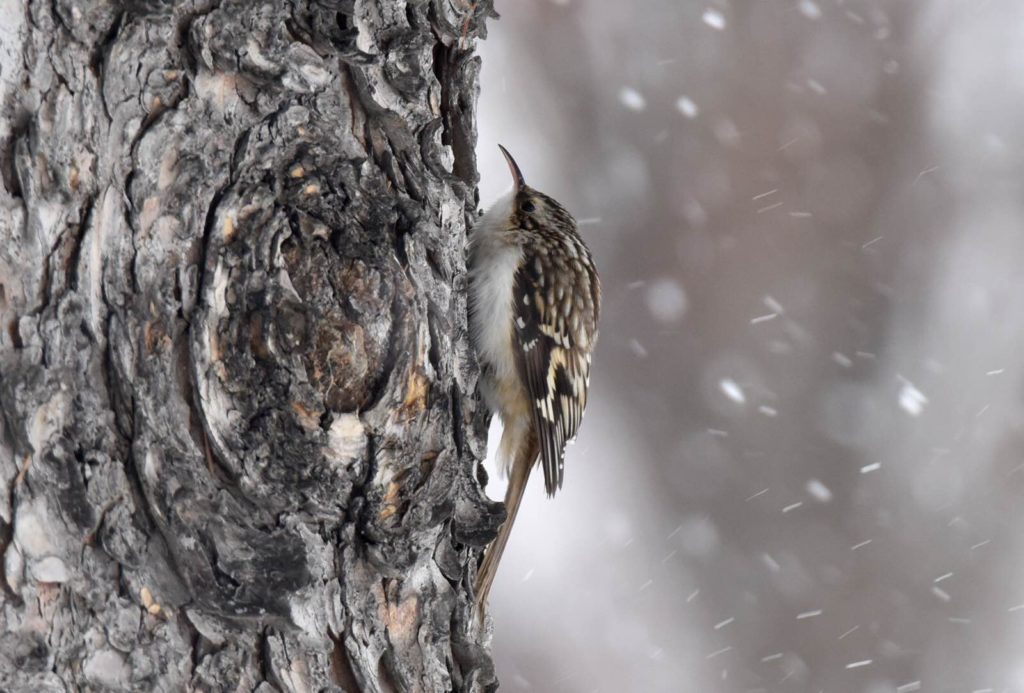 A Brown Creeper moving up a tree. (Photo: Chris Geraghty) 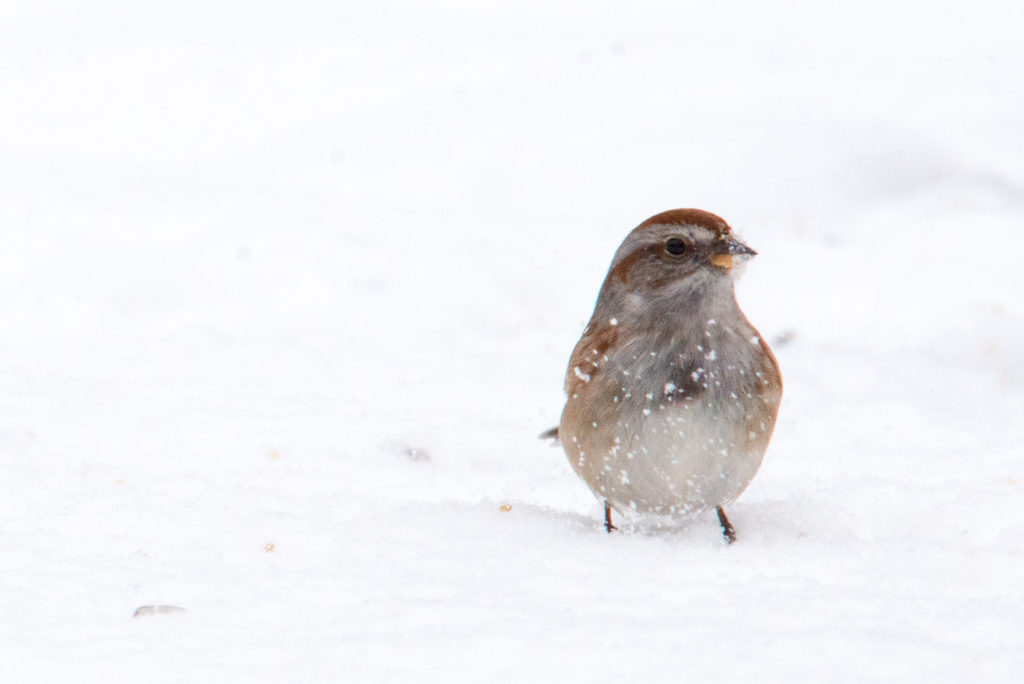 Among the hawks observed (4 Red-tailed and a Sharp-shinned) one of the Red-tailed was hunting on the airport grounds. The sharp-shinned was observed flying over one of the neighborhoods, likely scouting for local feeder visitors (the large majority of their diets consists of songbirds). Eight Snow Buntings were also sighted flying low overhead not too far from the airport, likely very recent arrivals from their arctic breeding grounds. 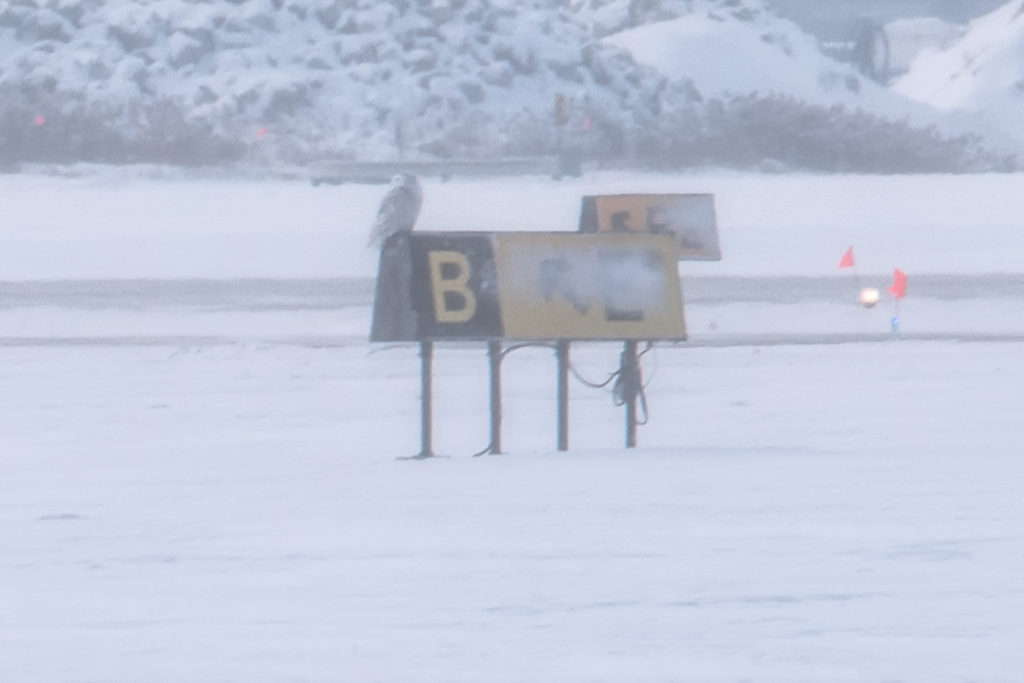 Spotting an owl that blends into its surroundings can be tricky, this one perched on a sign made it a bit easier. (Photo Connie Morgenstern)

Owls always generate excitement among observers as did the two Snowy owls we saw at the airport. Finding a mostly white owl on white snow is not the easiest thing to do. The first individual was spotted thanks to an “eagle eyed” spotter who noted it perched on a runway intersection sign that was rather far from our roadside observation point. The second owl was a bit closer to us along  the airport perimeter fence. It appeared to be hunting on the ground, but flew up to perch on a the corner of a nearby building and treated us with a closer look. It seemed quite large despite its distance from us, which led to speculation that it might be a female. Since the owls found at the airport are normally relocated for air traffic safety reasons, it was fortunate to sight them before they are caught and removed from the local area.

Overall, despite the frigid weather conditions, 23 species were observed for a total of 376 individual birds. Of those, Starlings won the species count for the day at 98.

In the spirit of the upcoming BPQ 100th Anniversary, here is a list of the species observed in the sector during this year’s count and the  year they were first observed during a Montreal Count. The first ever Montreal Christmas Bird Count organized by Bird Protection Quebec took place in 1929, but the initial two years were conducted in the Chambly area, and are not reflected in the figures. You can read more details about the first BPQ Christmas Bird Count and about the general history of the CBC in this post.