Home/Other/News from the Alfred Kelly Nature Reserve
Previous Next

Just before the holiday season, Sheldon Harvey, President of Bird Protection Quebec, represented us at an important press conference held at the Alfred Kelly Nature Reserve and organised by the Nature Conservancy Canada, with whom we are partnered in this sanctuary and its development.

At the conference, Sheldon made a presentation on behalf of BPQ at which he spoke of the legacy of Alfred Kelly and the opportunity his contribution to the resources of our charity gave us to enable BPQ to make a significant donation just a few years ago to the purchase and preservation of this unique territory by the NCC.

You can find out more about the Alfred Kelly Nature Reserve on our website.

This enormous, thousand acre piece of virgin forest and cliffs lies between Piedmont and Prevost about an hour’s drive north of Montreal. The land, apart from two areas which BPQ have owned for a quarter century since they were left to us by Alfred Kelly, was purchased by the Nature Conservancy of Canada – however the purchase in 2010 was made possible in part by a large grant to the NCC from BPQ. We are major partners with them and other local conservation groups in the management and success of this stunning property. The Quebec government have designated the property as a protected nature sanctuary. The reserve includes a large lake, extensive forests and two areas of high and inaccessible cliffs that are, amongst other things, home to regularly nesting Peregrine Falcons.  Almost all of the raptor species that can be seen in Quebec have been recorded in the Alfred Kelly Sanctuary.

** A few other images from the day are shown below – you can read their captions by hovering over the thumbnails, and see them full size by clicking on them. 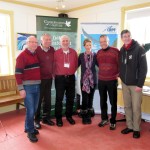 Representatives of the management partners (BPQ, CRPF and NCC) 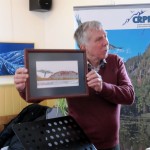 Claude Bourque, President of the CRPF. 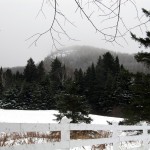 The Alfred kelly reserve in winter 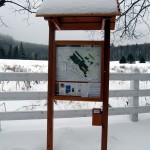 Smaller information panel at one of the Piedmont entrance points