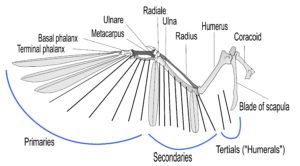 A bird’s wing and tail feathers are known as the flight feathers. The wing feathers are  collectively referred to as the remiges (from the Latin for “oarsman”) and are divided into three groups. The long and pointy primaries, the rounded or squared secondaries and the tertials  which lie close to the body. The primaries and secondaries are used for flight functions, while the tertials form a protective covering over the folded primaries and secondaries when the bird is at rest. A bird can’t fly properly if it loses or injures its primaries.