Coolest Bird of the Week: The Gray jay – National Bird of Canada

10 Paragraphs about the Gray Jay – our new National Bird

So by now you know that the hardy Gray jay is the new (though still unofficial) National Bird of Canada. After much essay writing, voting, debate and consultation with the public, professional ornithologists, conservationists and representatives of cultural and indigenous groups, Canadian Geographic Magazine announced the winning contest choice last week.

Yet, it seems that the debate over the choice of the clever corvid as our National bird isn’t quite over yet. Never mind that it was chosen because it isn’t already an official provincial or territorial bird, has cultural ties to Indigenous people, and is a year-round resident of the boreal forest that will nest at temperature extremes of -30 C (Minus 30!) Some people just aren’t happy!

As expected, the announcement caused immediate chatter within the local birding community. On the BPQ Facebook page, although most comments below the posted article announcing the winner were positive, some even elated, others seemed disappointed. In the on-line BPQ Songsparrow discussion group, commentary was positive too, but it seems just having a National bird isn’t enough for the hard- core bird enthusiasts. Some feel strongly that it now needs to have its name reverted from “Gray” back to the original “Canada” Jay! 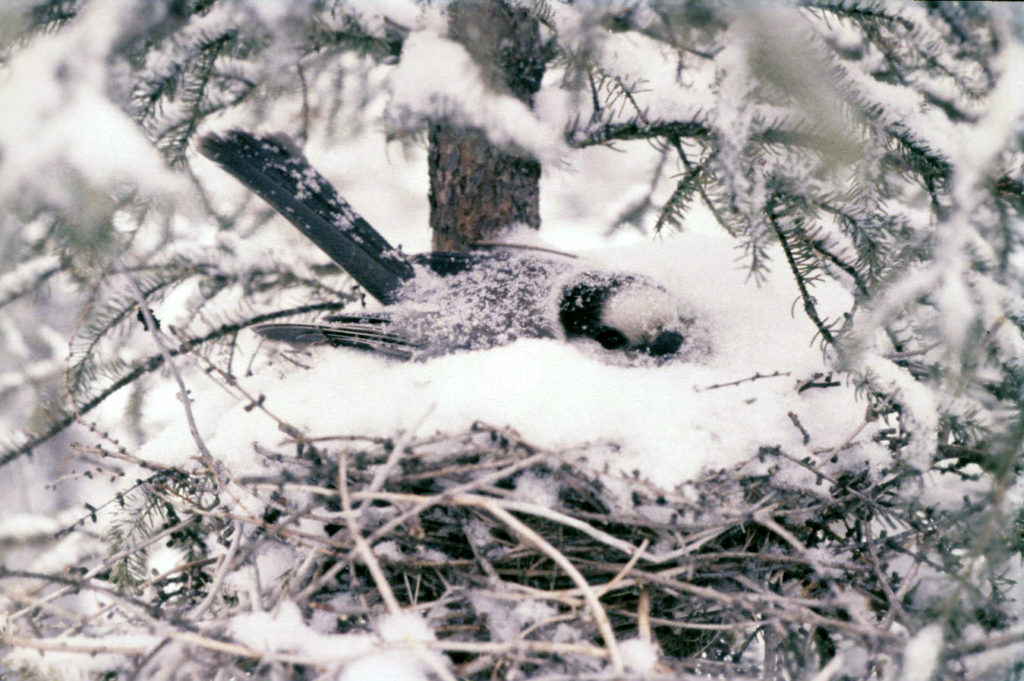 Nest building can start in early February and clutches initiated as early as Feb 22 at temperatures as low as -30 C.. (Image: Wikipedia)

As to the reaction from members of the public not highly invested in things bird, the reactions were also lively. On a local English speaking radio station, I heard the afternoon drive-home show host bemoaning the choice of a “boring gray bird,” suggesting that the Canada Goose or Loon and, yes, even a TOUCAN would be a better choice. I can only assume (hope?) he was kidding about the Toucan, but seriously? Mr. Radio Host, you do know the Toucan is not a Canadian bird right? No, not even if it’s colorful and you did see it in a zoo!

The last is but one of the funny things I’ve heard this week, but leads me to the point. Canadians collectively know too little about our bird life or why it is important, and so the strong reactions are a really a good thing. For many, the new National Bird will be an introduction to a bird they know nothing about, and that makes it a perfect choice. 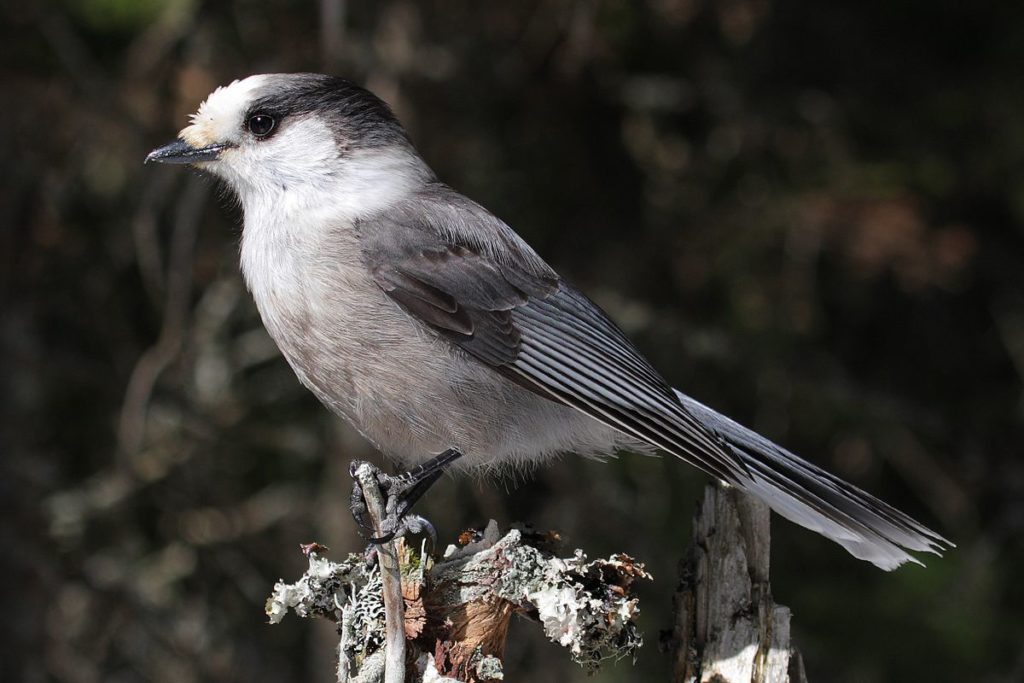 The Gray jay can survive in a hostile winter climate by scatter-hoarding food items fastened in trees under bark scales and lichens (Image: Wikipedia)

The very fact that it is unfamiliar makes it novel and interesting. That’s important because I’m willing to bet most people wouldn’t read much further if they saw an article announcing that the Common Loon or the Canada Goose was just declared the National Bird. Especially, since I have a feeling most Canadians think one of those already is Canada’s official bird! Perhaps the Gray Jay is not in our collective hearts quite yet, but it will be. Yes, the loon is on the “loonie” and the Canada Goose is “everywhere.” But enough already!

As Dr David Bird pointed out in his essay promoting the Gray Canada Jay, 99% of Canadians don’t know the difference between a Raven and a Crow. I say they can learn and now the Gray Jay provides the perfect opportunity to do so!

Making the Gray Canada Jay the National bird, and by extension also the official boreal forest PR bird, will, as Dr. Bird also pointed out in his essay, draw attention to the boreal habitat and other conservation issues. 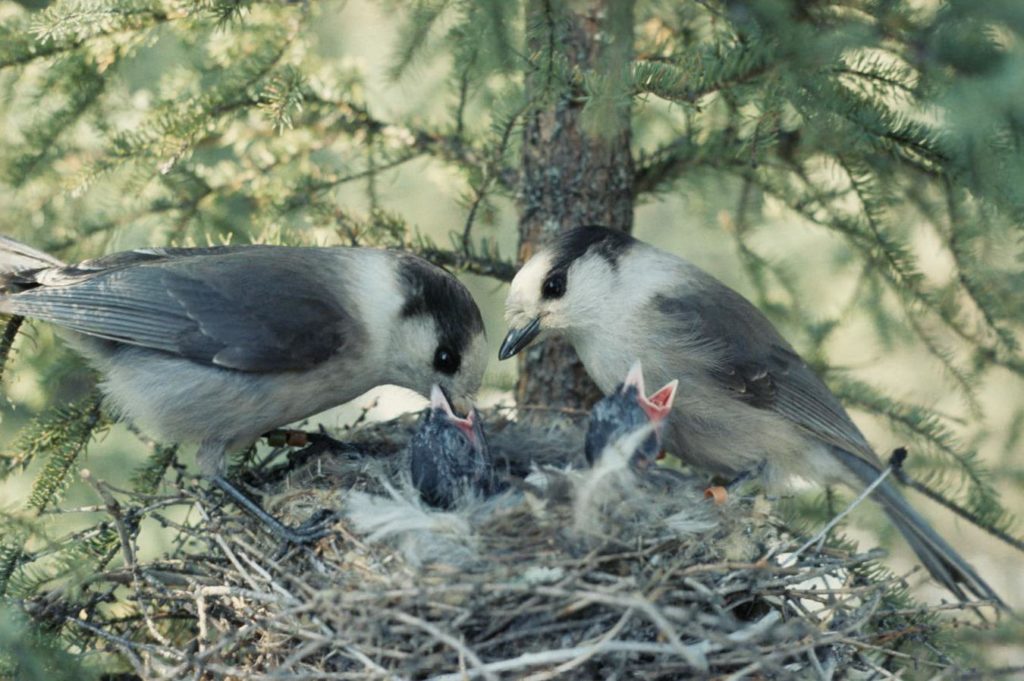 Nestlings are fed while lakes are still frozen, the ground snow-covered. Fledging occurs before 80% of migratory birds have returned. (Image: Wikipedia)

Just like when you click on a Google search link and an hour later realize you’ve ended up reading about something you weren’t even searching for in the first place! The Gray Canada Jay, with all of its wonderful connections to things uniquely Canadian, provides a rich opportunity for all Canadians to learn more about our country, its heritage and hopefully inspire us to travel and explore more of it.

So to that radio host and anyone else still asking what’s so special about a “boring gray” bird, I say this. If I may borrow a few words from a classic Shirley Temple movie line: Can YOU lay an egg – at minus 30 degrees?