Each fall, the Purple Martin (Progne subis) travels thousands of miles from its breeding grounds in North America to winter in South America and then makes the return journey the following spring. This large swallow, an aerial insectivore adept at snapping up insects on the wing with incredible flight maneuvers, faces numerous threats along its migratory route as well as at its breeding grounds. Since 1970, the neotropical migrant has suffered a population decline of 30% across North America as a whole, but, even more drastically, has seen a 94% loss of populations in Quebec.

They compete with European starlings (Sturnus vulgaris) and house sparrows (Passer domesticus) for nesting compartments in their breeding grounds. Since purple martins are migratory, there are a variety of threats that may affect them in different parts of their range, such as the increased pesticide use associated with agricultural intensification, habitat loss, and increased weather variability associated with climate change. 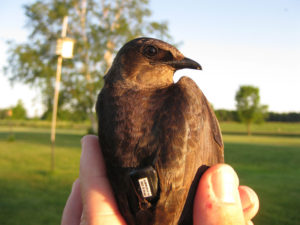 Researchers are using tools such as geolocation devices, banding and feather studies and surveys to examine the threats birds find along their migratory routes. In Quebec, for example, researcher and BPQ board member Kristen Lalla has been studying the species using GPS tags to track martins on their summer breeding grounds in order to understand possible causes of the species’ severe population decline within the province. She is hopeful that the information gained by using biologging methods such as the GPS will eventually help lead to conservation success.

Download our information sheet here to learn more about the Purple Martin and  how you can help in its conservation.