Birding without borders: putting another perspective on the joys of finding everyday birds

Today’s guest blog post comes from Noah Strycker, author of Among Penguins: A Bird Man in Antarctica (2011), The Thing with Feathers (2014) and, most recently, Birding without Borders (2017). However, as if writing three books by the time you are 31 years old isn’t impressive enough, in 2015 he also managed to see 6,042 species of birds (more than half the birds on Earth) in one calendar year. That feat, which most birders probably can’t even imagine completing within their lifetime, spanned 41 countries and all seven continents, earning him the Global Big Year record at the time.

Conveniently though, Noah was also the very entertaining speaker at BPQ’s monthly lecture in November, which is where I shamelessly corralled  the “Bird Man” for this guest post. Thanks Noah, for adding your unique birding perspective to our 100th anniversary year activities as BPQ’s own “Big Year” draws to a close!

When I visited Montreal in early November, a few locals invited me for a morning of birding around town. They were careful not to promise anything too crazy—after all, what could a guy who’s seen half the world’s birds hope to add to his list in Quebec, especially after fall migration was essentially over? Montreal is “generally fairly quiet” in November, they said.

It’s true that lifers are hard to come by these days, following my worldwide Big Year in 2015. Other than White-winged Crossbill—a longstanding nemesis—I’d already seen every conceivable early-winter bird in the province of Quebec. But I was excited to witness Montreal’s hotspots, because for me it was new territory. Although I birded in 41 countries in 2015, Canada wasn’t one of them.

And so, on the morning of November 6, I set out with two McGill ornithologists, Kyle Elliott and Rodger Titman, and a graduate student, Emile Brisson-Curadeau. The four of us headed to Hungry Bay to look for deepwater ducks.

By coincidence, Kyle was an old friend. When I was 18, I spent several months on a nest-searching project in central Panama, and met Kyle there while he was working on his own research. We went on several memorable adventures together that season in 2004, and I hadn’t seen him since. It was fun to meet again in Montreal, 13 years later.

Conditions were choppy at Hungry Bay, but the place was anything but empty at dawn. A trio of White-winged Scoters flapped past followed by two Surf Scoters. Common Loons were all over the place, including a flock of 18 that flew over in ragged formation. For me, seeing these birds in Montreal—a five-hour drive from the nearest real ocean—was fascinating. In Oregon, where I’m from, any inland scoter or loon is a rare discovery.

We continued to Marais de St-Timothée, a marsh and beach along the St Lawrence River. Eight species of waterfowl mixed in the marsh, including four American Black Ducks, and several American Tree Sparrows flitted near the beach. Again, it was fun to see some birds that I seldom encounter at home, even if they were local commoners. 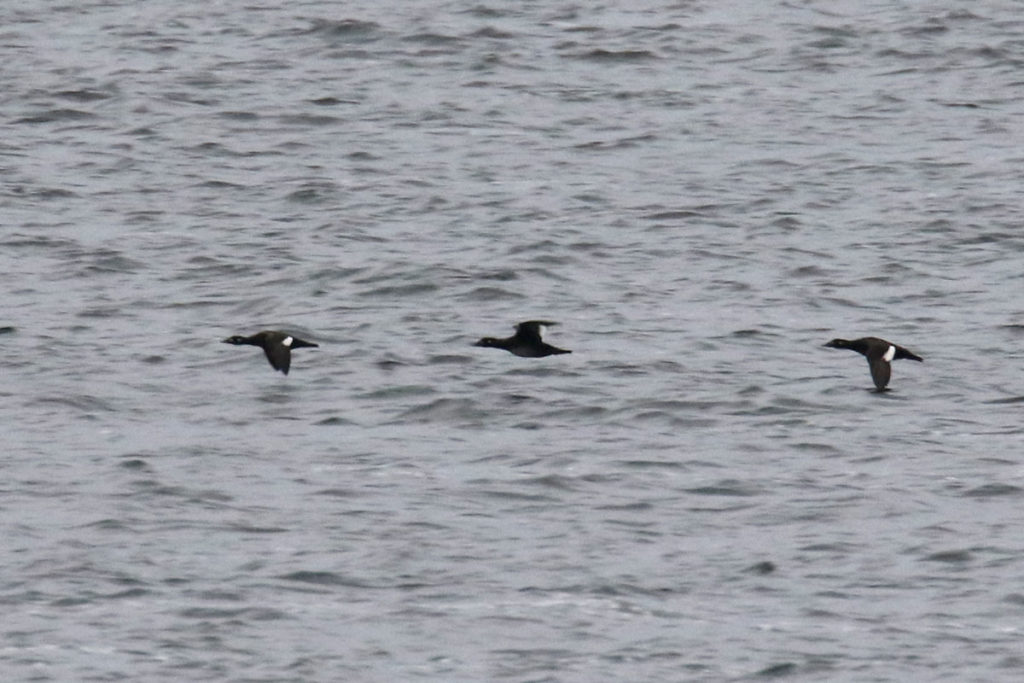 But the day was still young. Kyle, Rodger, and Emile handed me off to Barbara MacDuff, who took me to the McGill Bird Observatory banding station at the Stoneycroft Wildlife Area in Sainte-Anne-de-Bellevue. When we arrived, the banding crew was closing the nets for the last day of the season. They had caught only two birds that day, and the vibe was quiet. But even in the first week of November, migratory birds are still moving through: Barbara and I walked the net lanes and spotted a Blue-headed Vireo, perhaps the last straggler of 2017. 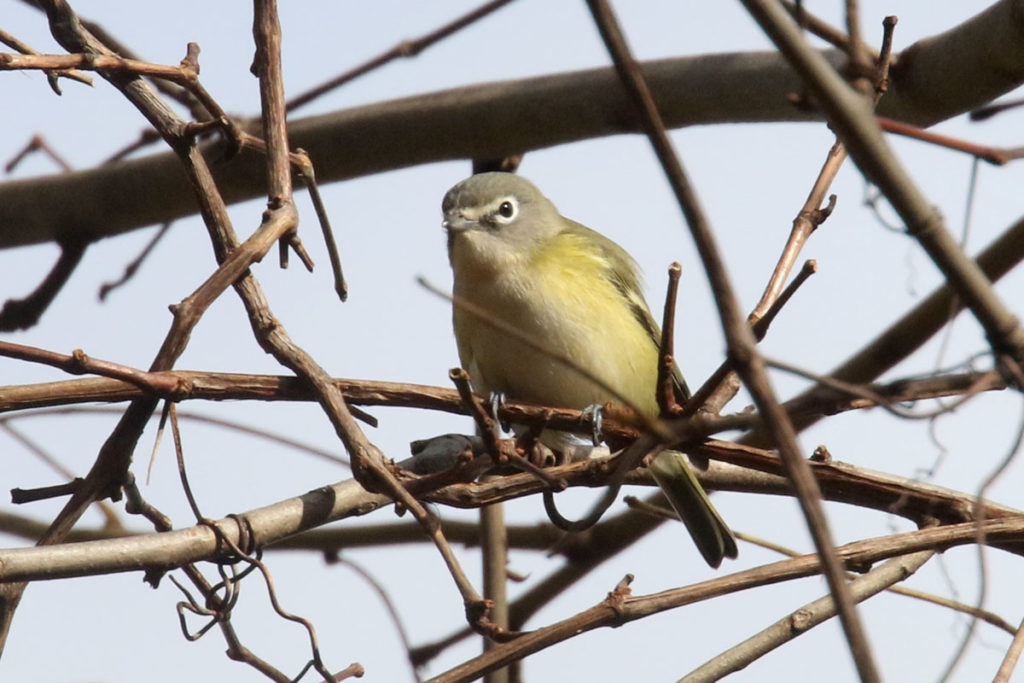 A Blue-headed Vireo, perhaps the last straggler of 2017, at the MBO ( Photo: Noah Strycker)

Finally, Barbara transferred me to three young birders with a specific mission. Ana Morales, Angelika Aleksieva, and Laura Tabbakh—originally from Ecuador, Bulgaria, and Lebanon, respectively—were determined to find a Red-headed Woodpecker that had been reported at Refuge Faunique Marguerite-d’Youville, a reserve about 20 minutes south of Montreal. With just enough daylight left to dash out and back, the four of us piled into Ana’s car for a wild woodpecker chase. 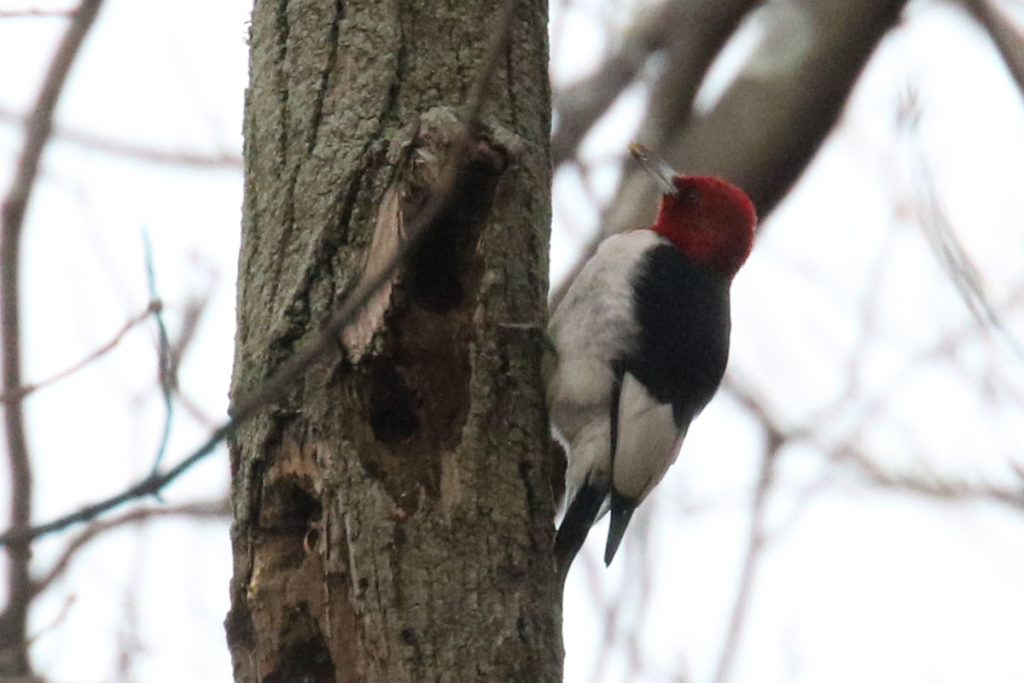 An unexpected sighting of a Red-headed Woodpecker rounded out the day’s birding. ( Photo: Noah Strycker)

Red-headed Woodpeckers are rare around Montreal, at the northern edge of their range, and I hadn’t expected to see one on this trip. But that’s birding—you never know what will turn up! Crowds of birders were at Marguerite-d’Youville, which made the woodpecker easy to to find: Just follow the long line of camera lenses. It posed on a snag, blasé about its sudden celebrity, while Ana, Angelika, Laura, and I admired its colorful plumage. Nearby, several dozen Rusty Blackbirds—a vulnerable and declining species globally—worked through the undergrowth.

By the time I gave my presentation for Bird Protection Quebec that evening, about my worldwide Big Year, I’d had a wonderful day on the outskirts of Montreal. My Big Year taught me to appreciate birds locally, along with everything else that birding entails—the people, places, and experiences along the way. When you look for birds on a planetary scale, it becomes more important to focus on common species (rather than chasing rarities), and I learned the joys of watching everyday birds. It’s all a matter of perspective: For someone from the West Coast, birding in Montreal is an exciting prospect in any season!

Thanks to everyone who came to the meeting on November 6—I enjoyed an amazing day with good company, and was honored to present to BPQ. I hope to return to Montreal again soon!

Find out more about Noah Strycker and his books at noahstrycker.com