Seeing as Feather Fest is part of our 100th Anniversary programming, today’s “countdown” post has a conservation history slant.
You may be familiar with the plight of the passenger pigeon. They once numbered in the billions (yes, billions!) and were so abundant that flocks could take days to fly over an area. Yet, after relentless hunting through the 19th and early 20th century, the last bird of the species, Martha, died in captivity on Sept 1, 1914 in the Cincinnati Zoo. Which, by the way, was not quite three years before the founding of Bird Protection Quebec. They looked somewhat like a Mourning Dove on steroids, which might explain why they were popular in pies and common restaurant fare. But food wasn’t the only reason they were popular targets for market hunters. Here’s something you might not know.

Feather Fact #5. Let’s Get Down Tonight. 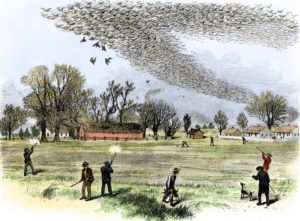 Hunting a flock of Passenger Pigeons

If you haven’t been following along with our daily feather facts, we’re counting down to BPQ’s Feather Fest at Park des Rapides in Lasalle on Saturday, September 23rd with a Daily Feather Fact. It’s all part of our 100th Anniversary celebration programming. For event details, download the flyer in English or French.

Image sources: Hunting Scene (engraving) and Martha on display at the Smithsonian, Wikimedia.